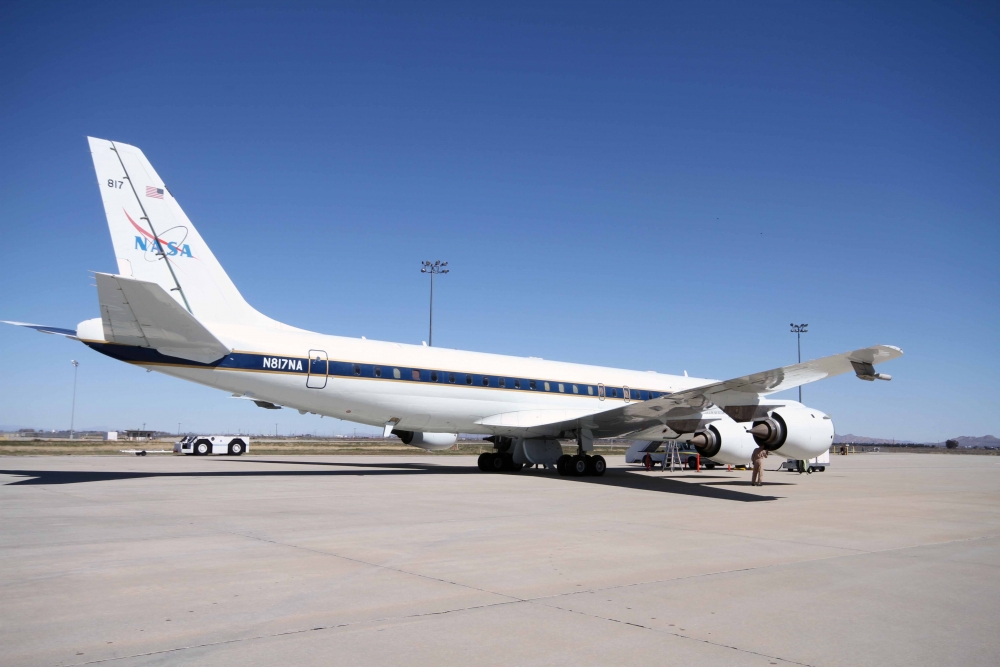 Editor: This is one of my favourite stories and it seems by the views one of yours as well. So we have updated it……enjoy!

I am having an affair. She is 47, though she certainly doesn’t look her age, and I will go to the ends of the Earth for her. What’s more my wife understands and turns a blind eye to my other love. For that love is an aircraft — but not any aircraft.

This is the Douglas DC-8, the most rugged jet airliner ever built and the only subsonic design to break the sound barrier. Its nickname says it all — the Battleship Eight. It is the plane that started my passion for aviation in 1968.

Read: The history of the magnificent DC-8

Fast forward to 2017 and an opportunity of a lifetime — to fly on the NASA DC-8, one of the last flying today. A year in the planning and approval, delayed by aviation tragedies such as MH370, the big day loomed with almost schoolboy first love anticipation. Is all my photographic equipment charged up? What if the weather is lousy … will the mission be scrubbed? How much time do I allow to drive from Long Beach to Palmdale, California, in peak hour?

The day dawned without a cloud — just light mist. And I timed the drive — three hours — perfectly.

NASA’s Armstrong Flight Research Centre is at Palmdale regional airport California, about 120km north-east of Los Angeles. It is home to a fleet of five planes, including the DC-8 and a Boeing 747SP which sports a massive telescope. The fleet is dedicated to advancing technology and science through flight. It has a wide range of missions from validating space exploration concepts to airborne remote sensing and science missions. One of the DC-8’s main missions is the IceBridge.

Using the most sophisticated suite of innovative science instruments ever assembled, it characterizes annual changes in the thickness of sea ice, glaciers, and ice sheets. In addition, IceBridge collects critical data used to predict the response of the Earth’s polar ice to climate change and the resulting rise in sea levels.

But this is not just the province of a few scientists. When the plane last went on a mission over the South Pole, students used an online text chat portal that allowed them to ask researchers questions over the DC-8’s satellite communication system. During these chats, IceBridge communicated with 867 students in 37 classrooms across the US and Chile. But I am well away from the South Pole on a balmy Californian morning.

I am greeted like a long-lost friend by NASA pilots — there is a special bond between lovers of the DC-8. These pilots have the right stuff in spades. Our captain for the flight is Richard “Dick” Ewers, a 43-year veteran. From 747s and airships to F-18 fighters he has done it all and more.

Helping him fly the Battleship Eight is another top gun, David Fedors. A colonel in the US Air Force Reserve, Fedors has also been a military and civilian test pilot and is the lead author of numerous Air Force Test Center technical papers.

And the third member of the flight crew is the all-important Flight Engineer Matt Pitsch, who wasn’t born when this DC-8 first came to life.

Built in 1969 as a Douglas DC-8 Super 62, it was delivered to Italian airline Alitalia. In its glory days, it was the world’s longest-range plane, whisking well-heeled jetsetters across the globe.

NASA bought it in 1985 and fitted new technology General Electric engines that improved fuel burn and range significantly. It has 52,700 total flight hours on the clock — a fraction of its capability. In fact, the DC-8 is the only aircraft that has unlimited structural life. It was designed by old-school aeronautical engineers, who cut their teeth on the plane that taught the world to fly — the indestructible DC-3.

The DC-8 — and its more famous and successful competitor the Boeing 707— launched the jet age as we know it in the late 50s.

But back to the present and before I can ride in this magnificent machine, which is kept in factory new condition, there is the small matter of safety instruction. This is not the three-minute one that no one takes notice of on an airliner. I am at NASA and things are done differently.

The briefing starts at 10.30 am and lasts an hour. It involves a detailed Powerpoint presentation and the fitting of oxygen hoods. After the briefing, we are taken out to the DC-8 for further instruction aboard. By noon we are done and have time for a quick snack before we have to be back aboard. Take-off time is 2.30 pm which means boarding an hour before.

Cdr Ewers adds icing to my cake by inviting me to ride in the cockpit. Am I dreaming?

I get my oxygen/smoke hood which must be carried at all times and take my seat in the cockpit. After a long and painstaking list of pre-flight checks, we are ready to reach for the skies. Although fitted with much of the latest high-tech gadgetry, the DC-8 is essentially a 1950s technology plane and this requires a lot of input from the three-man crew. We are airborne in just 20 seconds — we are light for a four-hour mission.

After take-off, a right turn has us climbing over the snow-capped mountains surrounding LA, which is soon below us. The city of freeways seems to spread for hundreds of kilometres. The DC-8 is as steady as a rock and she soars to 38,000ft.

Capt. Fedors loves the DC-8. “The DC-8 was the first aircraft I ever rode in as a wide-eyed kid, launching my interest in aviation, so it is a privilege to be able to fly it in 2015, ” Capt. Fedors says. “She is proven very reliable and adaptable to the science mission. The robust structure makes it easy to modify and she is the best-loved aircraft in NASA Armstrong’s fleet by both maintenance and aircrews.”

It was time to launch the weather sensors built by Yankee Environmental Systems. Five were dispatched over 30 minutes and our mission was complete.

Our DC-8 gently rolled right towards San Francisco. Far too quickly for me the flower-power city was below and not a cloud to impede the magnificent view. Another right turn and Palmdale bathed in a setting sun was on the nose of our DC-8.

Our commander did an easy curved visual approach and I was left with the impression he could do it in his sleep. But there was nothing sleepy about the landing drills on this DC-8. Everything by the numbers.

The touchdown was smooth as the sunset behind the mountains. Time to say goodbye to my other love and return to my true love.