Our 3 Cards, 3 Continents challenge is now well underway and the competitive spirit is heating up! I guess you can’t invite a culinary concierge along on your trip without stirring up the competition a bit.

What is 3 Cards, 3 Continents?

Where in the world are the 3 Cards, 3 Continents contestants today?

Day 1: Nick started his trip off with a flight from DC to Cairo on Egyptair, part of a more complex flight itinerary which we’ll learn more about as he goes. This cost him 105,000 Air Canada Aeroplan miles which he’d gotten by transferring 88K from Capital One and 22K from Amex. (A previous version of the trip required 110K total before it was changed to this current version.)

Though just a layover, his Cairo visit was plenty of time for a guided tour of the Pyramids and Sphinx before hopping right back on a plane for his Cairo to Istanbul leg with Turkish Airlines. All this and he still had time to join our Ask Us Anything from the Crowne Plaza Istanbul Harbiye. (He booked the stay with 10K of the 22K IHG points he bought for $126.50.) 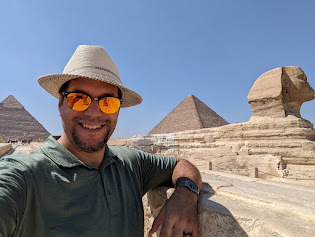 Day 2: From the time Nick woke up in Istanbul he was already on his second continent (on the Europe side of the city). And even though this was another <24 hour layover, he jumped on a yacht trip to cruise and cross the Bosphorus. (Now we see why his packing strategy deserved so much attention!) This helped him achieve his third continent by day 2: Asia. Then it was back to the airport yet again where he awaited the next leg of his flight in the Turkish Airlines business class lounge, (which he says is so nice it rivals Qatar’s business class lounge for the best he’s ever seen!)

Day 3: Late night arrivals and action-packed layovers seem to be Nick’s new life and his itinerary today was no different. He spent most of his incredible day swimming with whale sharks and sea turtles until it was time to go to the airport for his next mystery destination. Luckily the Grand Hyatt Muscat (which he snagged for just $115) gave him a late checkout so he had time to attempt to dry his swim gear with a hair dryer. (Not all luxury travel is luxurious, folks!) 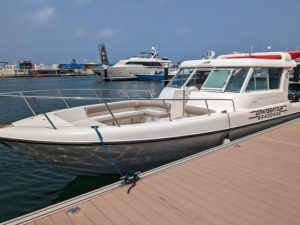 Day 4: Nick, Nick Nick. My head spins just trying to keep up with you. He started his day on an Oman Air business class flight (one of Air Canada’s non-alliance partners), and spent a few hours admiring the sites of Bangkok – (I’m convinced just to remedy old wounds from his Air Asia ticket preventing Thailand entry back in the 40K to Far Away challenge). And just when we thought he might kick back and stick around somewhere, he headed right back to the airport for a 5th Freedom Flight on Gulf Air (another of Air Canada’s many non-alliance airline partners). 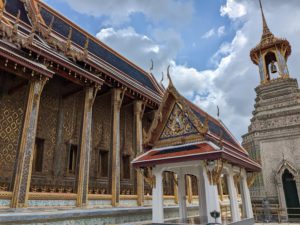 Day 5: Nick woke in a Capsule hotel in Singapore and made a bee-line for the J2 Crispy Curry Puffs, Michelin Bib Gourmand food stall for some incredible looking food for just a few bucks. By noon it was already time for him to board a Singapore Airlines flight in their 737-MAX business class. He’s since reported that it knocked his socks off, saying: “After flying so many times in such close succession, it stands out even more…the service is head and shoulders ahead of most airlines.” Day 1: Stephen’s trip has just barely begun, starting with an evening flight from JFK to London on a brand new discount airline: Norse Atlantic Airways. He booked this flight for just $228.80 cash. Luckily his Amex Platinum gives him the Priority Pass, which means despite flying a discount airline, he’s been chilling in the Primeclass Lounge at JFK while he awaits his flight!

Day 2: Much of Stephen’s trip is still shrouded in mystery as he’s alluded to the fact that he chose Europe as his first destination for a very specific, yet undisclosed reason, though he’s given some details about his day visiting castles and footballers here. We’re intrigued what else awaits him in Aberdeen…(or elsewhere?)

Day 3: Today we resolved the mystery of why Stephen had his eye on Scotland…he was headed after the world’s shortest flight, a 1.5 minute Loganair flight from one Orkney Island (Papa Westray) to another (Westray). While on the Orkney Islands, he got to see sites even more ancient than the pyramids!

Day 4: Stephen’s been soaking up all the ancient and fascinating sites the Orkney Islands have to offer, but today he boarded that same record-short flight, this time to make his way back to London before he moves onward. While Nick and Greg are taunting each other with food posts, Stephen’s taking the high road and shared a savvy tip about Premier Inn, a brand common in the UK which doesn’t show up on OTAs. That’s his depot for the night until he heads to some unknown spot tomorrow. 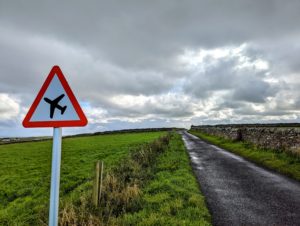 Day 1: Greg and his travel companion Maisie officially started their joint travels today, wasting no meal opportunities and grabbing some enviable pastries from Tartine in SFO before heading to the airport. So as not to make us jealous, Greg decided to share footage of the elegant United Polaris Lounge SFO instead of his tasty treats, but he’ll have to get over that by the time he reaches his next destination because we’re all curious about the culinary adventures Maisie’s got in store for him. We know that they’re headed to Tokyo, but it sounds like that’s not their ultimate destination. Where will that be and, more importantly…what will they eat once they’re there? Day 2: Greg and his culinary concierge Maisie had an enviable foodventure even before they left the airport. Their food explorations started at the Haneda airport during their layover there and included incredible sushi, fresh from the Tokyo fish market. All this before touching down in Saigon where their Asian food explorations continued…and got a whole lot crazier. I was very jealous of the sushi…and not as jealous of the coconut worm shot. The description Maisie sent along, however, almost had me changing my mind.

Maisie explains, “Chef Peter Chong Franklin of Anan restaurant in Saigon made us two cocktails off his special menu: the first was a coconut worm shot version 1 (less scary – his words, not ours) where they skewer the worm and cover it in cane sugar and then blow torch it to caramelize it before your eyes; and version 2, where you hold the writhing live worm by its head with tweezers and bite into it.”

Check out our instagram stories, reels, and highlights for more! Day 3: Greg and his culinary concierge Maisie got an early start to check out the floating market on the Mekong Delta. Once again they’re going for exotic foods that might shock more than entice…depending on how you feel about durian fruit for example, or a scary-looking fried elephant fish! They’ve been staying at the Le Meridien Saigon for 16K Marriott points (complete with upgrade) but seem to be spending most of their time on local boats!